From Horse Ranch to Welding Shop: Cinnamon’s Path to Becoming an Application Engineer 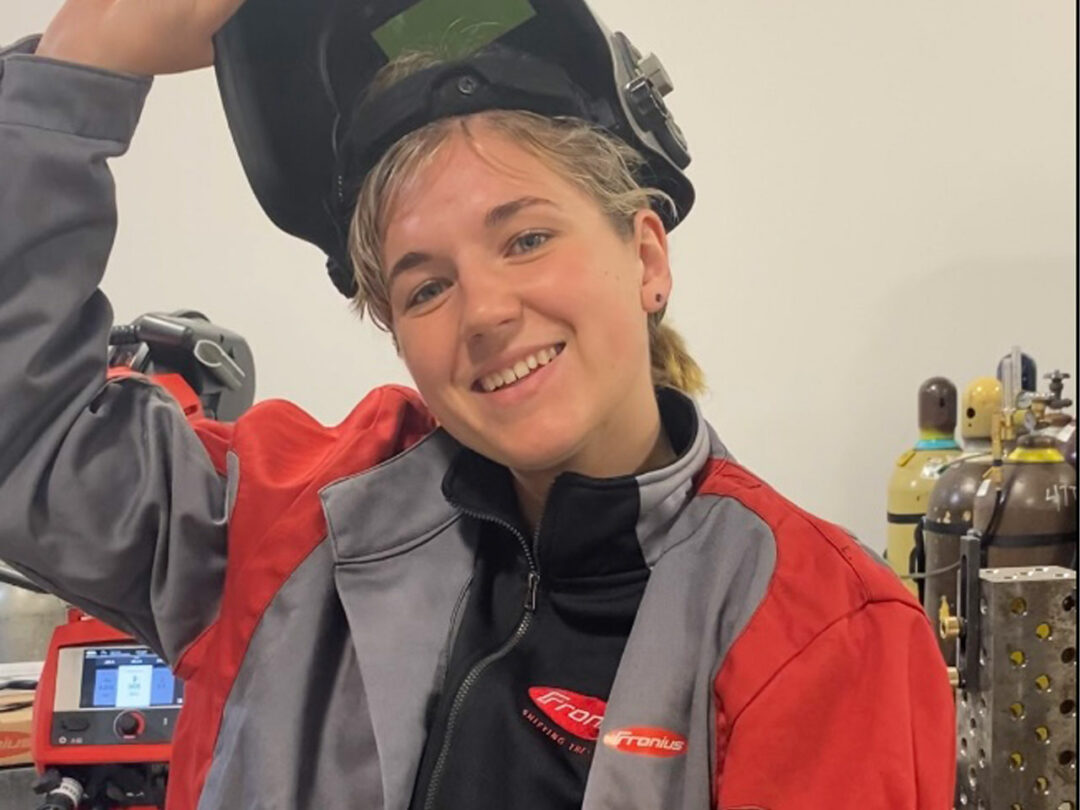 A peaceful part of the world, an idyllic horse ranch, a life far from the bright lights in the middle of nature – that’s how Cinnamon Digan grew up. Today, she works as an application engineer for Fronius USA in Brighton, Michigan. Read this blog to learn how she discovered her passion for welding through her horse, why welding is such an adrenalin rush for her, and how her welding projects are giving homeless people and animals in need a new home.

It all Began with a Horseshoe

“Wild horses couldn’t drag me there!” – Not something that Cinnamon Digan can say about welding. Quite the opposite, as it was on the horse farm where she grew up that she first got the welding bug. At 16 years of age, “Cinn” – as she’s usually called – did her first welding projects using some horseshoes that were lying around. She made them into small snowmen at Christmas, for example. These were done at school as part of a practical agricultural course. “I got to know a whole range of trades during this course, one of which was welding. I simply brought along some horseshoes and put together my very own artworks. We only had access to a really ancient welding system that could only do electrode welding – not the ideal process for small art projects. But hey, it worked, and I really enjoyed it right from day one.” Cinn took some photos of her welding projects and shared them on social media. Before long she was known as “the welder girl” and her work started receiving lots of attention: “People were impressed, and that encouraged me to carry on welding.”

Her passion for the craft of welding was lit. When she turned 18, the option in her final year at high school to join a welding course at a vocational school gave Cinn the opportunity to develop her know-how. The marks she obtained as a result counted towards her high school grades. Other students chose math or natural science courses, but Cinn opted for the practical route – a decision she doesn’t regret in the slightest: “The decision to totally focus on welding was dead right. I was totally committed to it right from the beginning – it’s basically my passion.”

After completing her welding courses, Cinn put her newly acquired welding knowledge into practice by starting to work part time for a local welding company. “This really helped me understand what welding is all about in the real world, away from the classroom and the training centers.”

After finishing high school, Cinn signed up for the “Welding & Fabrication Engineering Technology” bachelor’s degree at the Pennsylvania College of Technology, where she graduated in 2021. Shortly afterwards she started her present job at Fronius USA in Brighton, where most of her day is spent providing technical support. She helps customers solve the problems they come up against when welding. For example, Cinn will be on hand when a welder is looking for the best set of welding parameters for a material they’ve never used before.

Cinn says the reason she decided to choose a practical career in what tends to be a male-dominated profession is down to her childhood and teenage years in the country: “In the area I grew up it wasn’t uncommon to see girls messing around with cars or doing other manual jobs. That’s what I enjoyed doing too – it was part of my everyday life.” She never experienced any negative or lukewarm reactions to her choice of career. On the contrary: “When my friends and family saw the passion I’d put into my horseshoe welding projects, they encouraged me to develop my skills. I’m aware that my career choice is a little out of the ordinary, but that’s what I find cool about it.”

There were 11 other female students on Cinn’s welding course – in other words she wasn’t the only girl. Up to now she’s always felt that what she’s doing is valued, including by her male co-workers. It’s only in a few exceptional cases that she feels at a disadvantage, for example when heavy components have to be lifted. Sometimes she feels she’s at her physical limits. But there’s always a solution. “For example, my boss showed me a few tricks for using a crowbar as efficiently as possible to get greater leverage.”

Bye Bye to the Old Stereotypes

Cinn believes that many stereotypical roles are hard for women to shake off. “Although stereotypes in sectors like ours still exist, I think a lot of it is in your head. Even I have sometimes taken comments the wrong way. For example, when a male co-worker offered me some help with a job, I found myself thinking, “Does he want to help me ‘cos he thinks I can’t do it right? I was questioning it, even though it’s perfectly normal to offer to help one another out, regardless of gender.”

Campaigns specifically aimed at employing more women in the welding sector are something that Cinn sees as an important way of tackling stereotypes and encouraging more women to take up welding. However, they’re not the main reason why more women are choosing it as a career. “I think the fact that the number of female welders in welding businesses is increasing is more to do with how we live nowadays. In a similar way, more and more men are choosing jobs that were traditionally done by women, such as nursing. People are more inclined to do the jobs they really want to do. They’re no longer so worried about what people will think of them, or what society expects. The new generation’s approach is simply, ‘Hey, you do your thing, and I’ll do mine.’ We’re both doing what makes us feel good, and that’s how it should be.”

This is how Cinn characterizes her job. Talking to her, you can clearly sense the passion she feels for her work. “There are a couple of things that fascinate me about welding: first, the artistic aspect. Second, the fact that I can repair things, put them back together again. It’s also a skill that not many people master. It’s something unique, and that’s what I like about it. Welding for me is an adrenalin rush – it’s exciting, pure action, a job that’s never ever boring,” is how she summarizes her passion for her career. What also gives her a buzz about welding is that at the end of the day there’s something to see – a result. “It’s an activity that demands an unbelievable level of skill. Seeing that you made all the correct settings or that the weld runs exactly as you’d imagined gives you a spookily satisfying feeling”, explains Cinn.

Welding for a Good Cause

Another factor that reveals how much welding means to Cinn is her commitment to Rescue Rebuild, a charity whose volunteers build and refurbish shelters for the homeless and animals in need. Cinn only started working for the organization a short time ago, but loves being able to do some good. “It’s fantastic to give something back to the community and help others. I’m determined to be involved with Rescue Rebuild projects for a long while yet.” Just recently she helped the organization construct a raccoon enclosure from metal. “We did everything, from pouring the concrete and cutting the metal to welding it all together. It was great fun and we all learned something from each other”, recalls Cinn.

“If you Enjoy Welding: Go for it!”

Anyone who’s interested in welding and wants to forge a career in this sector, especially women, has Cinn’s full support. “Just do it, don’t bother about what everyone’s thinking or what society expects of you. I believe that in 2022 we’ve at last realized that it doesn’t matter one bit whether a job is typically done by a man or a woman. The only thing that’s really important is that everyone does a job they want and really enjoy. That’s all there is to it. So, if it’s welding that floats your boat: Go for it!”

Want to know more about what other women have to say about their welding experiences? Then take a peek at our blog post on Laela Holden, and keep your eyes peeled as the subject “Women in Welding Technology” will continue to feature in this blog over the coming months! 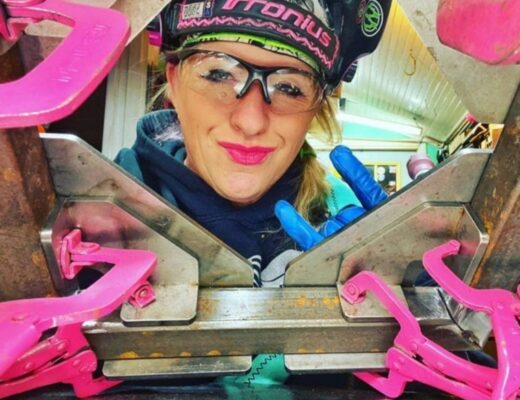 Welder and Influencer Laela Holden: “I’m Not Going to Be Held Back by Gender”

A world full of welding - our Fronius store in Inn

Happy Monday! Hope you had a great start into the

Welding fume is among the greatest risks facing we

Whether it’s a MIG/MAG, TIG, or manual metal arc

Choosing the right welding torch for your applicat

Did you know that without adequate protection, wel

Don't be scared! Our new product range will provid

TIG DynamicWire - based on active control of the w

The TIG DynamicWire Process is based on active con

TIG DynamicWire - The easy way of TIG cold wire we